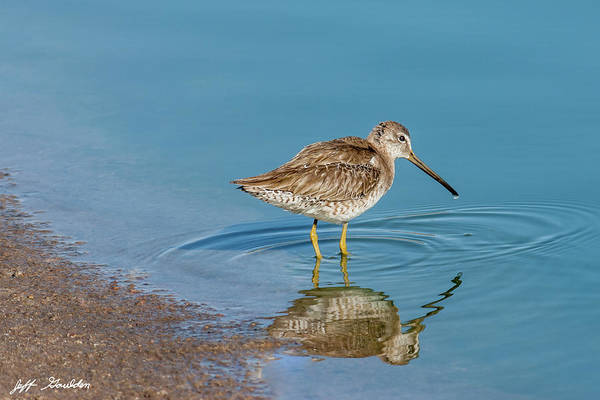 Long-Billed Dowitcher Probing in the Mud by Jeff Goulden - 8" x 5.5"

Long-Billed Dowitcher Probing in the Mud art print by Jeff Goulden.   Our art prints are produced on acid-free papers using archival inks to guarantee that they last a lifetime without fading or loss of color. All art prints include a 1" white border around the image to allow for future framing and matting, if desired.

The Long-Billed Dowitcher (Limnodromus scolopaceus) is a medium-sized shorebird and member of the Scolopacidae or sandpiper family commonly found in... more

Congratulations, your work is Featured in "A Birding Group - Wings" I invite you to place it in the group's "2020-2021 Featured Image Archive" Discussion!! L

Congratulations, your work is Featured in "Birds In Focus" I invite you to place it in the group's "2020-2021 Featured Image Archive" Discussion!! L

Congratulations, for the Homepage Feature, in the Art Group, “BEAUTY OF ARIZONA,” for the week of Friday, April 9, 2021! You are welcome to submit your featured artwork in the group's discussion thread, “APRIL-JUNE 2021 ''NEW'' Thanks & Features Archive” Thank you for sharing your artwork and being a member of the group. like/fave Janet🌵

Thanks Janet!! Much appreciated.

The Long-Billed Dowitcher (Limnodromus scolopaceus) is a medium-sized shorebird and member of the Scolopacidae or sandpiper family commonly found in a freshwater habitat. They feed by moving their long bill underwater in an up and down motion. Their diet consists of insect larvae, crustaceans and mollusks. The Long-billed dowitcher breeds throughout western and northern Alaska along the coast and south to the foothills of the Brooks Range. During the non-breeding season, dowitchers migrate along the Pacific Coast from southwest British Columbia to Baja California also moving inland to Arizona, New Mexico, Texas and Mexico. This long-billed dowitcher, reflected in the water, was photographed while probing for food along the shore of Walnut Canyon Lakes in Flagstaff, Arizona, USA.